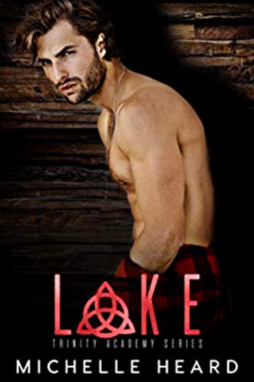 Lake, by Michelle Heard is a 318-page contemporary college romance novel and is the second book out of a 5-part series. And since this is a 5-part series, you can expect reviews by this author pretty back to back for the next few weeks as I go through the books. It is written from a first-person POV, two-sided.

I’m not usually fond of college romance’s because I have a hard time believing in finding true love at that age. Not to say it can’t and doesn’t happen, but it’s hard to believe it when people at that age still have so much growing up to do. You may wonder why I’m reading these books, it’s because she has a follow up series based off the children of these characters in this series…and I’m OCD…a 100% completionist to a fault, so here we go.

This book has a big conflict that focuses on classes, specifically the have versus the have nots. It takes place in a fictional place called, Trinity Academy, which is in California. First off, Academy is not what usually a college is titled as, but there you have it. Even the dorms on the campus are segregated based upon wealth.

First off, I appreciate the author stating in a foreword that she is not Korean and she did the best she could with research on Korean culture. I am half Korean…so I struggled a bit with this book because of some of the archaic cultural points, but it doesn’t mean they don’t exist.

LeeAnn is a young girl being forced into a marriage to support an alliance between her father’s business and the CRC Holdings business in America. Her father is almost holding her hostage from her own mother as her parents are estranged for her to marry Lake. LeeAnn has other plans. She thinks if she can get Lake to hate her enough, he’ll refuse to marry her and she’ll be sent back to Korea where she can be with her mom.

Lake in each book of this series has always been the good guy and in this story it doesn’t change…compares to Falcon and Mason I found him a bit…boring. That being said, he is chivalrous.

Reviews of other books in this series: