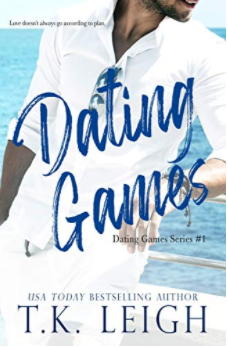 So, Dating Games, by T.K. Leigh is a 430 page Contemporary Romance novel. It falls under the trope of: Fake Relationship.

Long time reader, first time reading this author. If you’re like me, you stick with authors you know and have read ALL of their books. I’ve spent a lot of time reading this year…as a matter of fact, I believe this is book 389 for me.

First off, this book…what a terrible way for the heroine to start! Her boyfriend that she supported for 8 years, financially, is dumping her (they were together for 12) because she’s not “good enough” for him. So she goes off on a rampage, at a bar, on how she wasted her life and time. She wakes up the next morning next to an Adonis and she isn’t sure if they boned or not. She’s certain they have as she awakes in her underwear.

The hero ends up being a broken, yet chivalrous soul who is always looking out for others but never for himself. He proves it throughout the book in multiple ways from, taking care of her emotionally, financially, gifts, putting her needs before his own, you name it and he pretty much does it (I mean, he’s a billionaire, so why not).

This is romance, so there is the HEA and the marriage proposal, the whole nine yards. Overall, it was a nice read. This is a romance that I’d categorize as a slow burn. Kissing, sex, all happen relatively late in the book, about 50% in. Outside of the physical aspect, here are my overall critiques on the book:

Generally, I enjoyed the book. It was really long though and some scenes I felt weren’t necessary as they didn’t really add to the book or to the character development. As for the author, like I said, it’s the first book I’ve read of hers and I thoroughly enjoyed it so I went ahead and bought the rest of the books and plan to read them all.

One thought on “Review of Dating Games by T.K. Leigh”