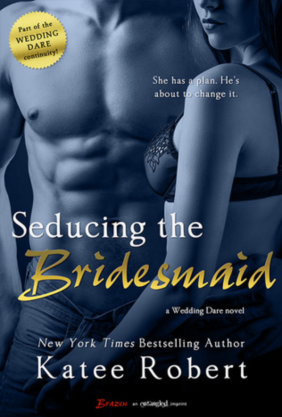 Seducing the Bridesmaid, by Katee Robert is a 192-page contemporary romance novel and is the third book out of a 4-part series. The series is different because though the stories are intertwined, four different authors wrote each book. It is written from a third-person POV, two-sided.

Katee is an author who generally writes dirty, dirty sex scenes. So if you’re someone who is looking for some dirty read (which there is nothing wrong with that) this is the book for you.

I started this series ages ago, but never came back to finish it. I will also not be doing reviews on the other two books as I read them so long ago I wouldn’t be able to give a thoughtful review.

Regan, what can we say about this girl other than she’s a go-getter. She has a plan and by god, she sticks with that plan. She’s level-headed and thoughtful, and she has to be as she is a head hunter for major corporations. And working in corporate (a total sausage fest) means she has two choices, she can either be flirty or be aggressive and, Regan, is definitely the latter. She is approaching an age where she thought she would be settled down or at least getting close to, but working as hard as she does has left little room for her to find romance, so she decides she needs to pick someone she sees as her professional equal, so she chooses Logan. Her one mistake? Sleeping with Brock on the second night of her friend’s wedding week.

Brock knows he grew up with a silver spoon, he knows he’s lucky, but what he doesn’t share is how he shares his wealth and how he started a successful non-profit to help abused women and their children. He knows in the eyes of others he comes off as a “good-old” boy, one who grew up wealthy and was a figurehead for his family’s corporation and never has he wanted to prove people wrong until he met Regan.